This is one of my favourite Brian Brake photographs, and it was one of his as well. You can see it exhibited in Ngā Toi | Arts Te Papa on level 5 of Te Papa at present, and in my book New Zealand Photography Collected.

The only time it has previously been seen was in Brake and Maurice Shadbolt’s 1963 New Zealand: Gift of the sea, reproduced in gravure ink so chalky you can almost scratch your nails on the page. But to Brake’s regret, it was dropped from the 1973 edition because the publisher felt the fashionable clothes the young people are wearing made it look out of date. Today the dated look is precisely part of what makes it interesting.

The clothes locate the photograph in time – 1960 – and the vast, bright blue Pacific before the trio seems to suggest not only the optimism and hope of youth, but of the times. The dreary post-war austerity of the early 1950s had now been replaced by an era of mass consumption. Conformity and the suppression of dissent were about to be challenged by a counter-culture of youth-led experimentation and revolt. New Zealand was becoming increasingly connected to an international world, looking across this ocean to the USA and less often in the other direction, to the United Kingdom. And from the USA, the youngest president Americans had ever elected, the charismatic, good-looking JF Kennedy entered the world stage, introducing the Peace Corps and the golden age of space exploration. In a symbolic parallel, a world once represented only in grey now became available in full colour, thanks to new printing technology and photographers like Brake.

Of course, these are sound-bite versions of history, stereotypes of the decades. Things were more complex and murky. Kennedy’s wife Jackie later described their White House years as ‘Camelot’, an idyll, but we now know that he was persistently cheating on her.

The Kennedy era ended with his assassination in 1963 amid claims of a conspiracy. Other figures of hope, his brother Robert and civil rights leader Martin Luther King, were gunned down in 1968. And meanwhile the US became bogged down in the unwinnable mess that was the Vietnam war. Slowly the optimistic sixties turned into the troubled, conflicted and muddled seventies.

This too might be read into the photograph. The couple are embracing, but the young woman is not at all engaged with her boyfriend. Her body is limp and her attention seems directed towards the other young man as he looks, in turn, at her. The scene recalls the films of 1950s-70s director Michelangelo Antonioni. His work has been described as a ‘cinema of possibilities’; all looks and moods, with little dialogue, and populated by characters detached from their experience. 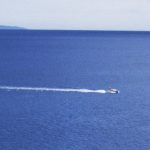 The sense of action paused is keyed by the speedboat buzzing through the picture. It functions adds interest to what would otherwise be a rather flat expanse of sea (try removing it in your mind). But it also suggests duration, causing us to figuratively hold our breath while it traverses the frame – which it does forever, eternally freezing this drama.

Although Brake’s caption only identified the photograph as Tauranga it is probably taken from the top of Mt Maunganui / Mauao, not far from the city. In the distance you can see Mayor Island / Tuhua. The young man at right is probably taking his shirt off because he has just made the steep climb on a hot, sunny day.