Seasonality in birds and birdwatchers

One of the characteristic sounds of spring in New Zealand is the clear, upward-slurred whistle of the shining cuckoo. Along with its long-tailed cousin, the two cuckoos are the only New Zealand forest birds that migrate away from New Zealand after breeding. This is in sharp contrast to temperate countries in Europe, Asia and North America, where a large proportion of land birds are migratory.

To hear the call of the shining cuckoo, follow this link, then click on ‘Male song’ under Sounds in the right-hand column.

Shining cuckoos spend the New Zealand winter north-east of Papua New Guinea, in the Bismarck Archipelago and the Solomon Islands. They return to New Zealand about the beginning of September, being first heard in the northern North Island, and spreading south to be found throughout the country by early October.

While the seasonal occurrence of shining cuckoos in New Zealand is well understood, the effect of their migration on the behaviour of birdwatchers has not been documented previously. The New Zealand Birds Online website was launched in June 2013, and provides an objective measure of community interest in different New Zealand bird species. A previous Te Papa blog (New Zealand’s favourite bird) reported that the tui was by far the most visited species page on the website during the first 12 months, with 14,969 views. The shining cuckoo came in at number three, with 8276 views.

Delving deeper into the user statistics, it is apparent that there was a strong seasonal pattern in viewer interest in shining cuckoos that is not found for any of the other ‘popular’ bird species. Interest in shining cuckoos closely matched the presence of the birds in New Zealand, with visits to the cuckoo page, rising in August and September, peaking in October, and staying high throughout the cuckoo breeding season. Interest declined after February, when the cuckoos call less often then quietly depart the country for their tropical winter retreat. 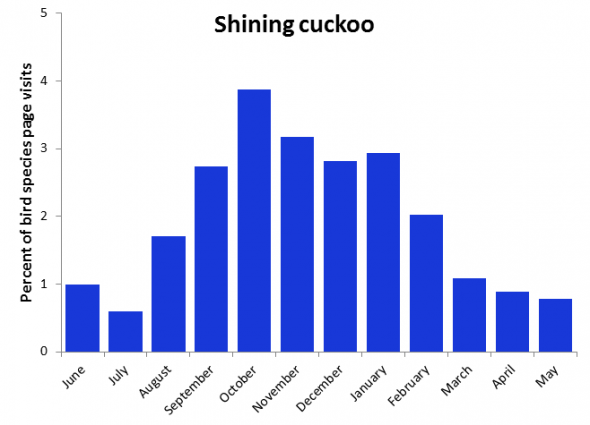 The close correlation between the presence of cuckoos and hits on the shining cuckoo webpage suggests that contact with native New Zealand birds is the major driver for people to seek information about them. As reported in the previous blog, this also explains why the top six birds visited on the website are all native species that are commonly found in one or more of our major cities.

If you wish to contribute to a citizen science project logging sightings (or ‘hearings’) of shining cuckoo or long-tailed cuckoo, click on the following links: