Goblins in the gallery

We have been busy installing Season 3 of Ngā Toi | Arts Te Papa on Level 5 of Te Papa, which will open to the public on August 23rd. But the exhibitions team haven’t been alone during the installation…there are also goblins in the gallery.

Luckily, these mischievous goblins haven’t been running through the galleries bothering the exhibition installers (although the art curators have certainly been doing plenty of that). Rather, the goblins are all safely contained in Frank Craig’s amazing 1911 painting Goblin Market, which is being featured in our International Art section this season.

This curious painting depicts a beautiful young woman in a dark wood, being offered a selection of sumptuous fruit by some goblins. Craig has painted the fruit to look bright and delicious against the dark tones of the painting—juicy oranges, pomegranates, cherries, grapes and apples fill their baskets and platters. You can easily see why the maiden would be tempted. 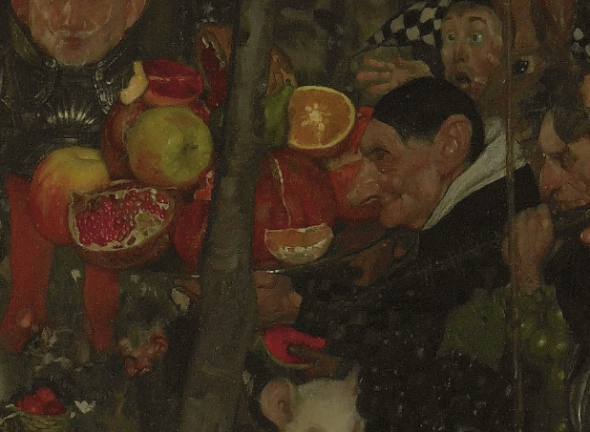 Hidden in the shadows of the painting, charming woodland creatures also seem to be enticed by the delicious fruit. Some of my favourite details include the little white mouse holding a plum in its arms, and the tiny frog with a basket of berries on its back: 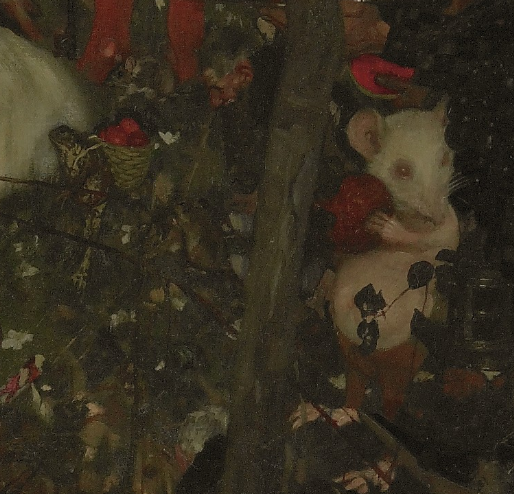 But there are darker elements at play here too. Although the goblins in front of the maiden appear quite friendly, look closely at the two nefarious goblins creeping out of the foliage behind her (below left). And then there is the unsettling voyeur watching the scene unfold from behind the trees – supposedly a self-portrait of the artist (below right). Poisonous nightshade and a dead sapling at the centre of the painting also give an ominous counterpoint to the appetising fruit. 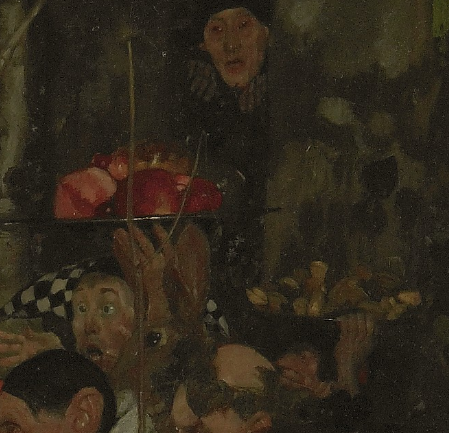 English artist Frank Craig (1874-1918) based his painting on an 1859 poem called Goblin market by Christina Rossetti. (You can read the full text of this wonderful poem here). In the poem, two sisters named Laura and Lizzie hear goblin merchants in the forest. Against Lizzie’s warnings, Laura trades a lock of her hair for the goblin’s fruit.

Craig’s painting depicts the moment before Laura makes her trade with the goblins, but those ominous clues hint at the trouble about to unfold. After her feast, Laura’s craving for the bewitched fruit becomes all-consuming and she becomes desperately ill. As Laura teeters on the verge of death, Lizzie bravely heads to the woods to buy more goblin fruit to save her sister. But the goblins want to see Lizzie eat it in front of them. When she refuses, the goblins get nasty:

Their looks were evil.
Lashing their tails
They trod and hustled her,
Elbow’d and jostled her,
Claw’d with their nails,
Barking, mewing, hissing, mocking,
Tore her gown and soil’d her stocking,
Twitch’d her hair out by the roots,
Stamp’d upon her tender feet,
Held her hands and squeez’d their fruits
Against her mouth to make her eat.

Lizzie keeps her mouth shut as the goblins smash fruit against her lips and spit juices on her face. Finally, she escapes and runs home. Lizzie lets her sister kiss and lick the fruit juice off her, which saves Laura’s life and restores her youthful beauty.

The poem uses a lot of remarkably sexual imagery, leading most readers to interpret it as a warning against giving into temptations of the flesh. Alternatively, some critics have read Rossetti’s poem as a feminist resistance to the Victorian literary cliché of the ‘fallen woman’; instead of being rescued by a man, the female protagonist is saved by the heroic intervention of sisterhood. There are also obvious Christian undertones in the theme of ‘forbidden fruit’, a Biblical reference to Adam and Eve’s original sin.

Craig’s painting of this twisted fairy-tale has been a favourite of the Wellington public for over 100 years. Art dealer John Baillie shipped it here from London in 1912, as part of a huge exhibition of contemporary British art. The Wellington City Council promised £1000 to buy pictures from Baillie’s exhibition for the future National Art Gallery (forerunner of Te Papa) that was being planned at the time. But there was a catch. This money was only available if the public could raise an additional £5000 in two months. Local newspapers ran daily stories about the Baillie exhibition to help drum up community interest, and the public was encouraged to vote on which works they thought should be purchased. Craig’s Goblin market was one of the popular favourites – even schoolchildren donated their pocket money to help buy it.

This wonderful painting is filled with many more fascinating hidden details, so come take a closer look when the exhibition opens on August 23rd. 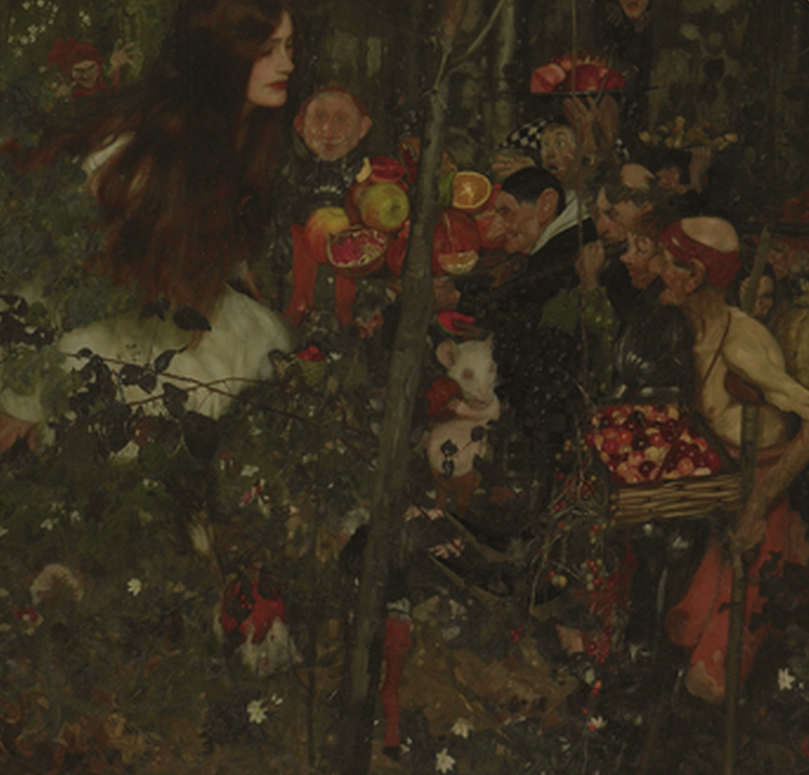