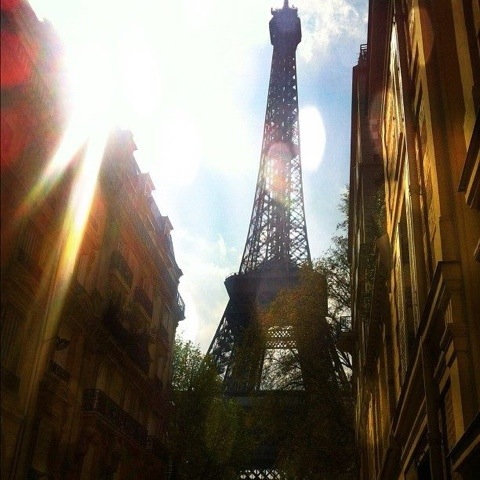 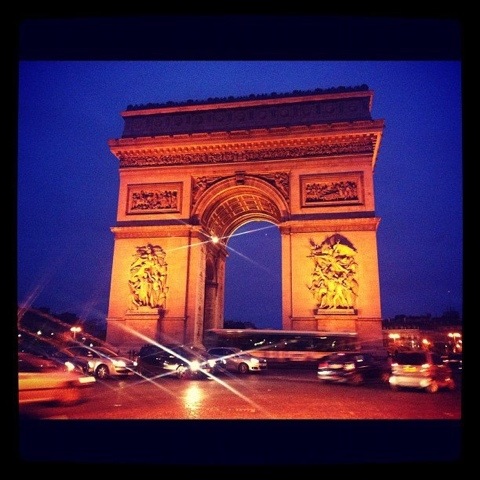 When I started writing this, it was midnight in Paris but back in NZ it was a bright cheerful 11 o’clock in the morning. I had spent 24 hours crossing from one hemisphere to the other, and was left struggling with a conflicting body clock, unfair currency conversions and a general feeling of bewilderment that I’m back in France, five years after my last visit.

I’ve been lucky enough to be brought here at the expense of Google – yes, that Google -who or which (what’s the right grammar for Google?) is launching a major museum project that Te Papa is involved with. A wee thing called the Google Art Project. But the launch is on Tuesday so I can tell you all about that once I’ve managed to take some notes and stuff. For the time being, I have been given a few days to orient myself and visit some museums before the big launch day, so I’ll waffle on about that.

So back to my lurching return to Paris…

I arrived here at 7am and to prevent myself from falling asleep during the day, as soon as I managed to dump my bags, I doggedly stomped straight to the Louvre. I love the Louvre. It’s the classic fantasy museum I would have made up in my head as a kid. A massive palace, maze-like and swollen with treasures collected by the French kings and conquerers from all over the world.

My nerdy museum alarms were going off in my head as I ogled each object. It was lucky I was by myself because I would have tried the patience of a saint as I kept stopping and looking or sniffing at the hidden mechanics of the Louvre – things such as beautiful little mosaic lions on a fireplace in the Egyptian gallery, the carved wood detailing on the doors,the air vents, the different (sometime dodgy) smells as you stumbled from room to room, the way light changed depending where in the Louvre you were standing or the hour of the day, observing the global nature of the Louvre’s visitors and watching where they congregated and how they all acted in the galleries. The physical act of visiting a museum for many visitors sometimes transcends just seeing the objects, sometimes museums are not only the theater where the action happens, it can also become a part of the action – or in museum terms, it can also become an object to appreciate. And especially in the case of the Louvre, the building can sometimes become just as important to your experience as a visitor as the treasures themselves.

One of the many cool things about visiting the Louvre is that so many of the pieces are familiar and famous, reproduced over and over in books, films, docos and websites. So there’s a gratifying feeling of satisfaction or sometimes an anti-climactic “weh!”, depending on the piece you’re looking at. But even though many of the paintings and sculptures in the Louvre are among the most photographed and written about in the world, there is still an impulse to want to see the thing itself with your own eyes.

Just think of the the famousest of all – the Mona Lisa by Leonardo Da Vinci. Reproductions of it are pretty good, even the cheapie posters are better to examine for the beautiful details, details harder to see when looking at the actual painting. The painting itself is smaller than you would expect. And it’s trapped behind barriers and glass, so viewing it can only be done from afar and usually with someone poking you in the side with their elbow. Yet it is one of the most famous draw cards of the entire collection, its fame pulling visitors who pack tightly side by side and crane their necks and digital cameras to collect their own blurry picture of it. 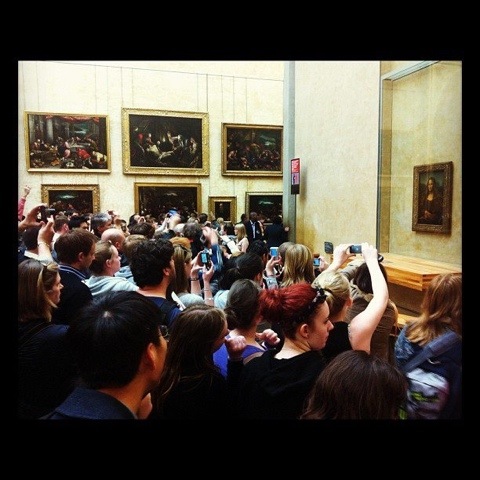 So why go to all that trouble when you can easily pick up a 3 Euro poster down the road? Especially as many visitors would have come from just as far away as I did. Well probably because there’s nothing like the real thing. Well that’s what I reckon. And the hundreds of people who I photographed that day giving the tourist camera salute to her are likely to agree…Even in this historical period of the Internet where zooms and close ups of these masterpieces are at the click of a button, the physical is still the winner over the virtual. But then it is important to also ask that without the virtual, without all the books that talk about the Mona Lisa, all the movies and docos that pontificate about her mystery, would as many people still show up to see her?

So why did I rattle on about that stuff you ask? What was the point of all that Louvre stuff unless I just wanted to show off that I was in Paris?

Well back to the luckiness involved in getting here. I’ve come to France at the invitation of Google and with the support of Te Papa, to attend the launch of Google’s 2nd phase of their Google Art Project. It’s a remarkable project, the first phase opened a few years ago and some very important museums and galleries around the world opened their collections to the world using Google’s hefty web power and, in a fashion similar to google street view, a web visitor could explore museums thousands of kilometres away by mouse-clicking their way through the halls and stopping to zoom in on selected pieces.

I was one of four curators who worked on the project for Te Papa, a group convened by our very energetic Digital Concept developer and helped by a problem-solving digital database team who oversee the electronic management of the collection records. Historical NZ Art, Photography, Pacific and the Māori collection were all represented by the four curators and we had a pretty tight schedule but completed our project obligations around October 2011 and have been sworn to secrecy ever since.

But while I helped on the project, I’m very curious to see how it ends up looking when I attend the launch at the Musee d’Orsay on Tuesday. Expanding knowledge of the collection, and allowing greater access through the google channels might sound very flash and vague, and I think that’s a good thing that the more people in the know the better. However, I’m also a bit old school and, while a presence in the Google Art project is awesome, the Te Papa crew who worked on this thought of it as a means to an end. Like the Mona Lisa, there’s nothing better than the real thing and maybe the Google Art project can be likened to a siren call to lure people to leave the ‘virtual world’ and come to see the ‘actual’ in Te Papa’s building. But it can also help us as a museum, luring community experts and researchers to participate in the ongoing research we do as a museum by providing access to pieces from afar. 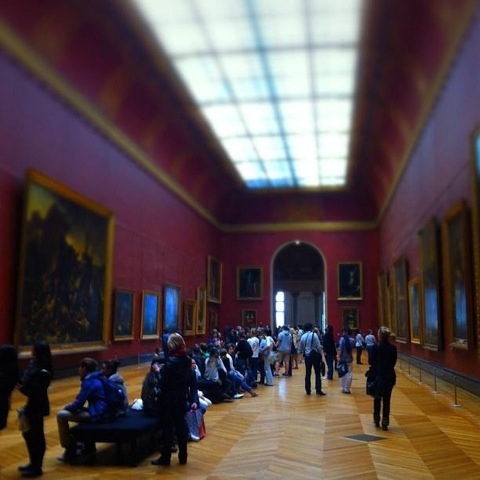