Our far South: all at sea

In the early hours of the 25th, we were awoken and called to the bridge to see the biggest wall of ice that I will probably ever see. 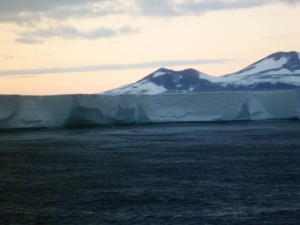 The Ross Ice Shelf, and enormous slab faced Ice sheet stretching over 700km from Cape Crozier to the Bay of Whales. The height of the visible face of the Ice sheet is about 40m high, being that bit of it that sticks out of the water.

This sheet ice loses chunks at the face that float off, these are called calves, and every so often huge pieces break off forming tabular icebergs which can be kilometres in length.

From there we turned to head West towards Terra Nova Bay on the Antarctic continent. Well that was the plan, we got to within about a kilometre when we were forced to abandon the attempt due to Ice build up.

This was the theme then for the next couple of days. We would head east to get out of the ice and then attempt to get to the continent, next stop Cape Hallet, then Cape Adare, all attempts to land proved impossible.

A final ditch effort for another shore landing came on the 27th at the Islands of Possession and Foyn (named for the gentleman that invented the exploding harpoon!).

Once again we were foiled with the only access point left on the island being a very slippery iced up beach of large boulders. Possession Island was where Sir James Clarke Ross planted the flag for Queen Victoria and the British Empire.

The weather was relatively calm and so a polar plunge was organised for those who had the need to prove something. Which I will admit was fairly entertaining.

When we left from there it was really our farewell to Antarctica as we started to head north and out of the Ross Sea. Not the end for Antarctic animals though, with further sightings of Minke whales and Emperor penguins.

Out in the forming sea ice, on some of the larger floes tracks of Emperor penguins were often seen, with the occasional Crabeater seal now also making an appearance.

Crabeater seals Lobodon carcinophaga, do not actually eat crabs, they do however eat krill. The genus name lobodon, means lobed teeth as they have multicusped teeth in the upper and lower jaw that come together to strain krill from the water. Krill are small shrimp-like crustaceans and form an imporatnat part of the Antarctic food-chain. In the Southern Ocean, one species, Euphausia superba, makes up an estimated biomass of over 500,000,000 tonnes – over half of this is eaten by whales, seals, penguins, squid and fish each year!

Crabeater seals are also regarded as the most abundant large mammal on the planet after humans, with a population at last census was about 15,000,000. However it should be clear that it has been a while since anyone counted.

True Antarctic seals (principally crabeater seals) were also killed in small numbers to be used as dog food at scientific stations until the early 1980s. The possible threat of renewed exploitation of Antarctic seals, especially by Norway after they mounted a pilot sealing expedition in 1964 persuaded the Antarctic Treaty Parties that specific protection was needed for them. The Convention for the Conservation of Antarctic Seal (CCAS) was agreed in 1972 and came into force six years later. In its Annex, the Convention specifies that up to 175 000 Crabeater seals, 12 000 leopard seals and 5000 Weddell seals can be taken. The Soviet Union took some 4000 seals (mostly Crabeater seals) with two vessels during a hunting expedition from December 1986 to February 1987 in the eastern D’Urville Sea and around the Balleny Islands. No further catches have been reported.