This week’s wedding dress is a recent acquisition – one which caused much excitment amongst Te Papa’s History team when it arrived. Wholly romantic in design, this dress is made from a Second World War silk parachute. It was made for Carol Gifford by members of her family, for her marriage to Owen Thomas on 8 August 1946 at St Andrew’s Presbyterian Church in New Plymouth.

Owen Thomas was discharged from the New Zealand Army in 1946. He brought the parachute back from the Pacific where he had been posted. During the war, silk was a rare and much sought after commodity. Japan – an ally of Germany and Italy since 1939 – was the world’s foremost supplier of raw-silk. Needless to say, the war severely interrupted its supply. In the immediate post-war period, fabric for new clothing, including silk, remained scarce. As such salvaged parachutes, which included approximately 65 metres of fabric, were prized. Not only did a parachute provide  dressmaker with ample fabric to utilise – the gown’s sweeping full skirt flaunts war-time fabric restrictions – it also enabled a bride to honour the war service of her husband-to-be.

Maker’s often incorporated integral elements of the parachute’s manufacture into the design of the garment. In the wedding dress below from the Smithsonian Collection, the ingenious bride, Ruth Hensinger, used the parachute’s the cords and cord casings to ruche the skirt, and cordless casings to form decorative band around bottom of skirt. Ruth married Major Claude Hensinger, a B-29 pilot in World War II who escaped his burning plane by parachute.

Josephine Gale, the maker of this hand-stitched petticoat from Te Papa’s collection, also utilised aspects of the parachute’s manufacture. The bodice features the ‘zigzag’ seam from the parachute’s canopy.

The petticoat, which was made by Josephine for her wedding trousseau, is made from a number of inset pieces, indicating that every available piece of fabric was precious and of use. Josephine married Flight Lieutenant David Gale of the RNZAF on 3 September 1946.

Following their wedding, Carol and Owen Thomas continued to make the most of their unexpected gift of silk. Part of the wedding gown’s sleeves were incorporated into christening gowns, illustrating the ongoing value of the parachute silk and associated memories to the family. 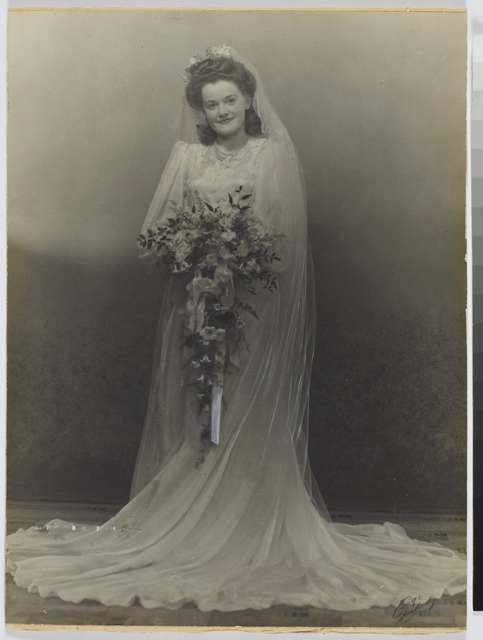 Wedding Dress of the Week is posted in association with  UNVEILED: 200 YEARS OF WEDDING FASHION FROM THE VICTORIA AND ALBERT MUSEUM, LONDON