Te Papa’s curator of terrestrial vertebrates Dr Colin Miskelly tells the eighth instalment of the unfolding story of the emperor penguin that went where none had gone before (at least in the age of digital media).

Previous blogs on the penguin were posted between 23 June and 29 August. 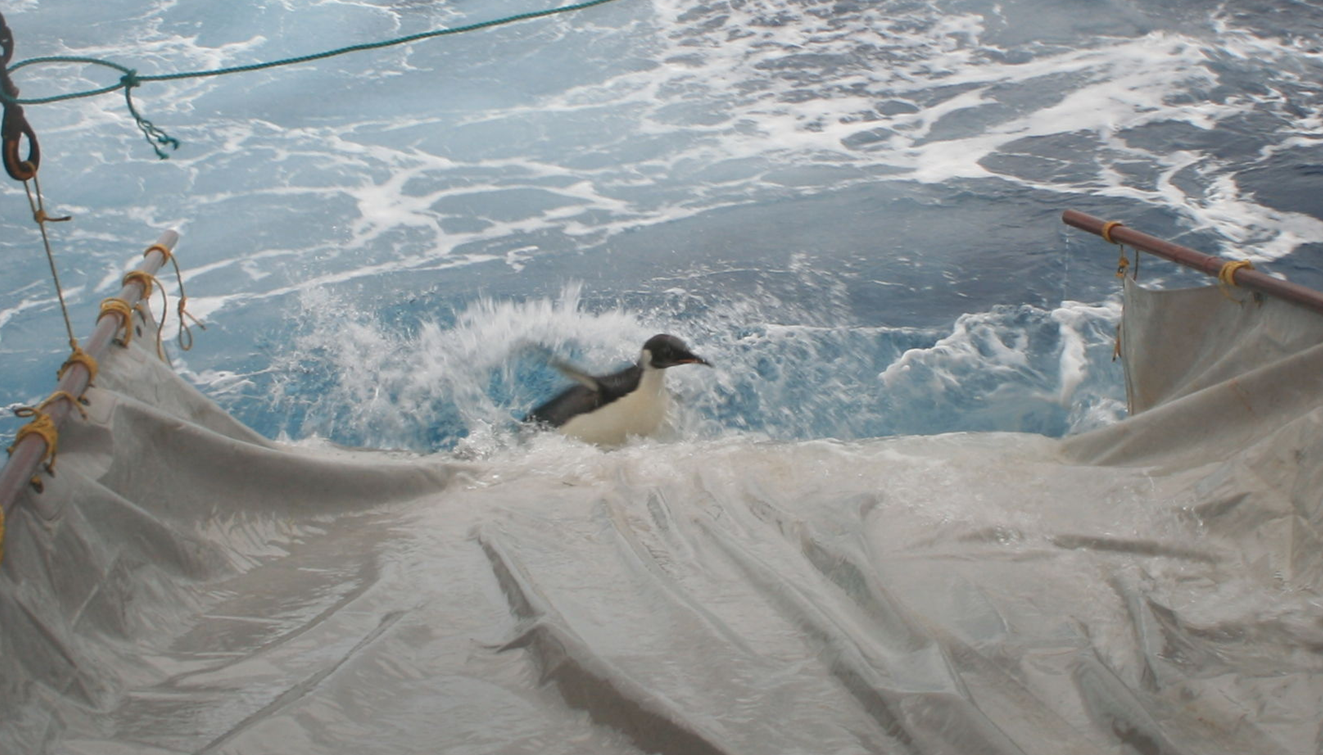 Seventy-six days after he stepped ashore on Peka Peka Beach (and 72 days after he was taken into care), the wandering emperor penguin has been returned to the southern ocean. At 10:28 am on 4 September, he slipped unceremoniously backwards down a tarpaulin ramp fixed to the stern ramp of the Tangaroa, and slipped from sight. The release site was in water 285 metres deep at 51 degrees 42 minutes south; this is about 1250 km south of Peka Peka, and 78 km north of Campbell Island.

His release was delayed by two days due to very rough sea conditions on Tangaroa’s voyage south from Wellington. For more details, see Lisa Argilla’s blog on the Wellington Zoo website. Lisa and two NIWA staff cared for the penguin while he was on board, housed in a specially designed insulated crate on the ship’s deck.

As the crate was non-metallic, and not inside the ship’s hull, the satellite transmitter glued to the penguin’s back successfully transmitted data during the entire voyage south. The transmitter was constructed and donated by Sirtrack, and data downloads are being sponsored by Gareth Morgan KiwiSaver – you can follow his progress on both the Sirtrack and Our Far South websites.

The transmitter has successfully sent several signals since the bird was released, and showed that he has moved slightly east then south since release. Of course there is no guarantee that he will continue to swim south (he swam north last time he was in the sea!). It may take a few days for him to get his bearings and start moving in a definite direction.

Campbell Island is the southernmost of New Zealand’s five subantarctic island groups. Two species of penguins breed there – the solitary-breeding yellow-eyed penguin, and the colonial-breeding eastern rockhopper penguin (one of the crested penguins). Several other species of penguin turn up as non-breeding vagrants, including frequent sightings of king penguins – slightly smaller and more colourful relatives of the emperor penguin. There are no records of emperor penguins ashore on Campbell Island, but it is within the at-sea range of juvenile emperor penguins.

King penguins breed in large numbers on Australian-administered Macquarie Island 720 km west-southwest of Campbell Island. Apart from Peka Peka Beach in 2011 and Oreti Beach (Invercargill) in 1967, Macquarie Island is the only other site close to New Zealand where emperor penguins have been found ashore, with birds seen there in Feb 1997 and Feb 1998.

Previous blogs on this topic: