Native foxgloves and forget-me-nots – Research past and future

By: Heidi Meudt
While exploring the subalpine flora around the Otira Valley during the field trip at the end of the Australian Systematic Botany Society 2010 Conference I recently attended, I came across some plants that I have studied in the past, as well as others that I’m about to begin researching. After a tramp up the valley, I headed straight for these sheltered, humid, south-facing cliffs.
This type of habitat seems to be the ‘favourite’ of many of the 13 species of foxgloves endemic to New Zealand (genus Ourisia, family Plantaginaceae). I knew from previous field experience that the Otira Valley is one of the best places in the country to see native foxgloves. And I wasn’t disappointed!

First up was creeping ourisia, or Ourisia caespitosa, a small, tiny-leaved species that is widespread throughout New Zealand.

Next up was one of the largest species of New Zealand native foxgloves, Ourisia calycina. This South Island species used to be called O. macrocarpa subsp. calycina, but some of my recent research has shown it is genetically and morphologically distinct from O. macrocarpa, and should therefore be recognized as its own species.

Interestingly, where O. caespitosa and O. calycina come into contact, they appear to hybridise. In 1897, Donald Petrie described what he thought to be a new species and named it Ourisia cockayneana after another famous New Zealand botanist, Leonard Cockayne. Since then, several lines of evidence suggest that O. cockayneana is a hybrid and not a distinct species.

The herbarium at Te Papa holds the type specimen of O. cockayneana which you can see in Collections Online.

Also nearby was yet another species of native foxglove, Ourisia simpsonii, which is known from alpine herbfields above 1200m on the South Island. 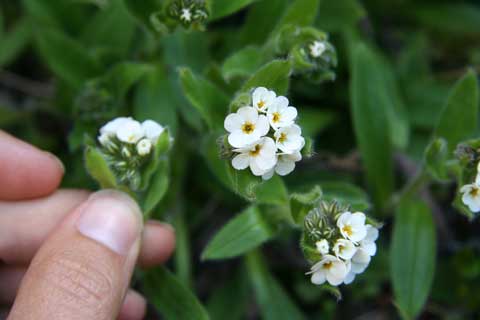 Together with my colleague at Te Papa, Carlos Lehnebach, we’ve only just begun to look at the evolutionary history and taxonomy of the 35+ species of forget-me-nots endemic to New Zealand. So stay tuned for more updates about our progress on our research.