With less than a month to go until our squid meets her adoring fans, there is still much to be done behind the scenes, not least of which is trying to figure out the best way of getting a 2.5 tonne display tank – squid included – from its storage facility across town, to its final resting place here at Te Papa. As the Exhibition Preparator assigned to the exhibition, it is my job to not only manage the installation of the show, but also to make sure the colossal squid and its tank arrive on site safely and in one piece.

Normally, moving a 2.5 tonne object wouldn’t be too much trouble, however, this project has raised a few logistical issues one doesn’t normally have to deal with. For starters, now that the specimen has been moved from her storage tank to the display tank, she has to stay there, which means we have to support her as much as possible throughout the operation and stop her from moving about too much – every time the specimen moves there is the a risk of tearing the flesh. 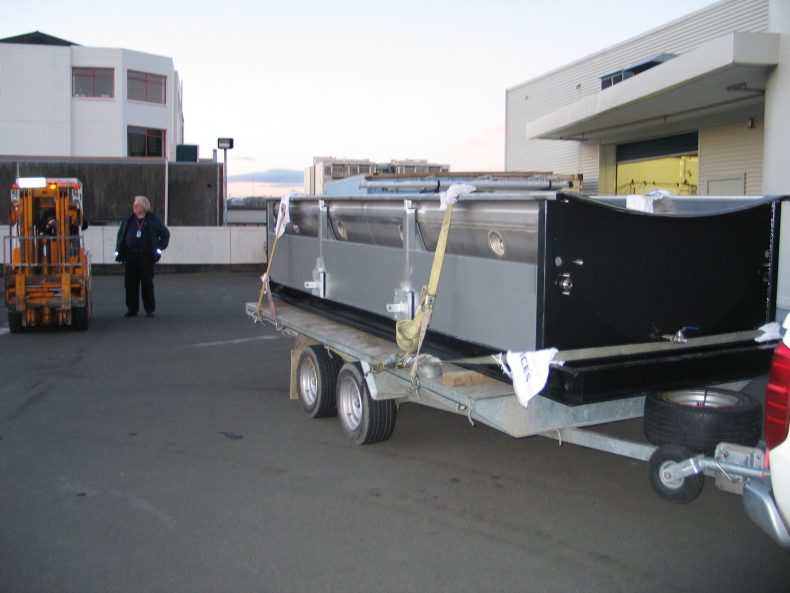 Added to this, we have to keep a small amount of liquid – about 200mm – in the tank. This is to keep her slightly supported and to stop her from sticking to the floor of the tank so that if she does move at all, she won’t be torn in two! While this helps to keep the squid buoyant, it doesn’t make transporting it any easier as we have to lift the whole thing onto a truck using a crane – a tricky operation under good conditions, a very risky operation when liquid is sloshing back and forth and throwing the balance off centre… kind of like trying to lift a see-saw in motion.

Because we don’t want the squid or the liquid to move too much, we made the decision to try to keep the tank as horizontal as possible. The problem is we have to drive down a street with a 20 degree gradient and navigate a 10 degree ramp before getting into the gallery. This issue alone has consumed many weeks of discussion, raised many bright ideas, and kept many engineers, crane operators, forklift operators, and designers busy trying to find the best solution. It’s resulted in a few sleepless nights too.

For a while there, it seemed as if every solution came with a whole new set of problems, and finally I decided that the best approach was the simplest – if we couldn’t avoid the slope of the road, we could control the speed at which it was taken. This first meant having a chat with the local council to find out what exactly were the implications of a very large truck rolling very, very slowly through four signalled intersections without having to stop for red lights. Well, the implications were big. One of those intersections, it turns out, is part of the state highway – this meant having to contract a traffic management firm to deal with obtaining permits at national as well as local level, and it also meant arranging a police escort, as the NZ Police are the only ones legally allowed to stop traffic at state highway intersections. Even with the police on board, this type of rolling closure can have a serious impact on the city’s traffic flow which we, and the council, want to minimise as much as possible, which means the whole operation has to happen in the dead of night.

So, what does it take to move a colossal squid across town? One very big crane, a climate controlled truck with adjustable shock absorbers, two forklifts, a traffic management firm, a police escort, and the good will of the Wellington City Council and Transit NZ.

In two weeks, we’ll know if all our planning will pay off – I hope so because with a move like this, you only get one shot, and no-one wants to be the guy that dropped the colossal squid!