Other squid families have hooks on the arms, or the tentacles, or both, but the colossal squid is the only hooked squid in its family (the Cranchiidae, about 20 species). It possesses hooks on each of the eight arms, and also on the club ends of the two long tentacles, but the arm-hooks and tentacle-hooks are very different.

The tentacular hooks are the swivelling hooks. Each sits on a short stalk, flush with the oral surface of the tentacle club, in a flattened depression that allows the flattened ‘back’ surface of the hook to rotate. The hooks can swivel 360 to 720 degrees, but it is not known whether the squid actively controls each hook individually, or whether the hooks swivel passively once latched onto the prey, in order to keep the best grip. There are 22 to 25 hooks in two rows on the middle part (manus) of the tentacle club, and each row is flanked by a row of tiny marginal suckers. The swivelling hooks are smaller than those on the arms and have only a singe main ‘claw.’ 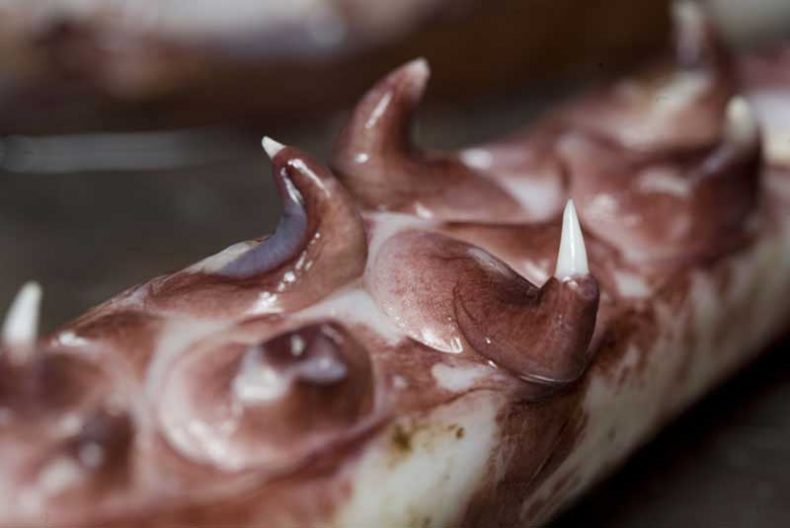 The arm hooks do not swivel. They are set in a double row in the middle of each arm, preceded and followed by the more standard toothed suckers. The arm hooks are set in fleshy, very muscular sheaths and are strongly attached to the arms. They are likely to assist in holding and immobilising struggling prey as it is being killed and eaten. Most of the arm hooks have the main strong ‘claw’, and also two smaller auxiliary cusps closer to the hook’s base, making them three-pointed and maximising their ability to hold and dig in. The base of each hook also has a complex structure that is set deep into the surrounding musculature.  The top picture shows the hook and serrated sucker im structure dissected out from the fleshy part of the suckers.