Following the very recent presidential elections in the world’s second biggest democracy (don’t forget India!) it makes sense to explore the connections between art and that system of government.

Victoria Coates, who combines being senior foreign policy adviser to former Republican presidential candidate Ted Cruz and a Renaissance art historian, did just that in her book David’s Sling: A History of Democracy in Ten Works of Art (2016). 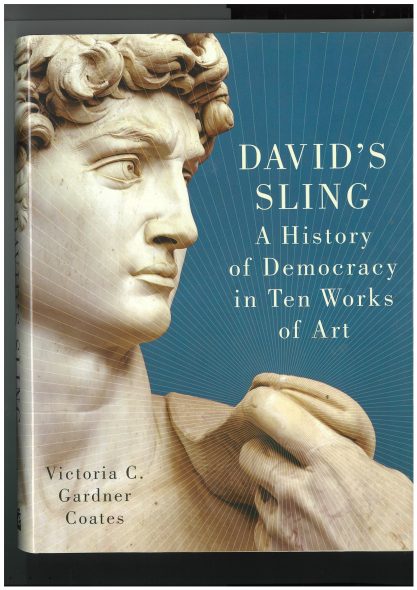 Coates is highly readable and she’s mostly not as right-wing as I had expected, prudently wearing separate hats for maximum impact. Yet her case studies beg some pretty massive questions…

The Parthenon Marbles in 1816

I’m unconvinced, for example, that the British Museum’s controversial acquisition of the Parthenon (Elgin) Marbles in 1816 meant that the sculptures ‘had found their true philosophical home in democratic Great Britain’ (Coates 187). The government of that time was one of the most reactionary in modern history. It opposed Parliamentary Reform (a fairer electoral system), the Catholic right to public worship and ‘Combination’ (trade union) membership for workers.

Greece was still ruled by the Ottoman Empire, though about to fight for her independence. Clearly she was in no place to have any say on the acquisition in 1816. Is the situation 200 years later any better?

Let’s stay with the Parthenon Marbles a little longer. One of the most remarkable coincidences in western civilisation is how the origins of democracy in the form we recognise today arose in Athens at almost exactly the same time as the radical stylistic transition from Archaic to Classical art.

Naturally we feel compelled to explore this nexus further. But the problem – as Coates’s account reveals – is that the subsequent connection between art and democracy is often highly tenuous; the ‘fit’ can be uncomfortable and sometimes downright unconvincing. Notwithstanding what happened on or about 449 BCE, art and politics have separate trajectories and indeed mindsets.

Most artists (from Phidias to Picasso) are much more interested in art – and still more so in what other artists are up to – than they are in politics. And sometimes art can belie the politics: Victorian sculptor Hamo Thornycroft was commissioned to erect imposing statues of British imperialist heroes General Gordon and Lord Curzon, but personally held left-wing sympathies, supporting the strike actions of dock workers and match girls, and joining the Art Workers’ Guild as a founder-member.

Democracy went through centuries of near extinction, arguably between the political murders of the populist Gracchi brothers in 2nd century BCE Rome and the American War of Independence (1776–83). Yet in this vast interlude we can take certain liberties and retrospectively recognise as democratic – however limitedly and imperfectly – the Florentine Republic, its political pride and identity epitomised by Michelangelo’s David, and likewise the civic pride of the Dutch Republic conveyed in Rembrandt’s The Night Watch (we’ll return to him shortly).

But to argue ‘good art = democratic [or even good] government’ is historically naïve. We admire Gianlorenzo Bernini’s amazing Baroque public art projects but have little love for the Counter-Reformation papacy; in turn, we may politically admire Bernini’s contemporary Oliver Cromwell, but British art really didn’t amount to much during his period in power.

For a comparison closer to home, few people in their senses would have preferred the political climate of late 19th century France – convulsed with revenge-seeking nationalism, religiosity and anti-clericalism, together with vicious anti-Semitism – to the Liberalism and participatory democracy of Kate Sheppard’s and R. J. Seddon’s New Zealand. But what about the respective nations’ art of that time? France wins, 62-13!

Rather than writing a Politics 101 blog, I’ll get you to look at art and think about its democratic implications. Here are three fascinating case studies:

In Eugène Delacroix’s Liberty Leading the People, the French Romantic painter created an image that became a ‘widely recognised symbol of liberation’ following the fierce but brief uprising of 1830. Parisian citizens forced the reactionary King Charles X to abdicate. He was replaced by the significantly-named ‘Citizen King’ Louis-Philippe.

Delacroix deliberately introduces a social (indeed ‘democratic’) mix of Parisians fighting for their cause, from the bourgeois young man in the top hat to the urban worker, exemplified by the boy holding pistols. Centre stage is the monumental figure of Liberty, an ideal which along with equality is an essential component of democracy.

Pablo Picasso’s Guernica (1937; Museo Reina Sofia, Madrid) is a painting of a century later, and an obvious choice in this discussion. It represents his impassioned response to the bombing of Guernica in the Spanish Civil War.  View the work on Wikimedia Commons.

Working at it furiously for 35 days in 1937, Picasso said: ‘The Spanish struggle is the fight of reaction against the people, against freedom. In the panel on which I am working, which I shall call Guernica, and in all my recent works of art, I clearly express my abhorrence of the military caste which has sunk Spain in an ocean of pain and death’.

‘The military caste’ means the Nationalist forces led by the ultimately victorious General Francisco Franco, aided by the Fascist powers of Germany and Italy. Had he lived just a little longer, Picasso would have witnessed Guernica’s symbolic move from the US to a belatedly democratic Spain in 1981; surely this would have delighted him.

During Britain’s darkest hour in World War Two when facing constant German bombardment, thousands of Londoners took refuge on underground railway platforms and even in tunnels. War can be a democratic leveller. The shelterers’ closely packed intimacy was enforced: often they were unknown to each other, and many people simply felt safer sleeping there.

The very fact that in this and many other Shelter Drawings Henry Moore avoids being heroic (unlike Delacroix), or indeed sentimental, makes these people’s situation all the more believable, poignant and timeless. What’s more, they really looked like that, as photographs by Moore’s good friend Bill Brandt attest.

Art critic John Russell memorably called Moore ‘the keeper of the national conscience’ and in the Shelter Drawings we understand why. Many people naturally think of Winston Churchill’s inspirational rhetoric in the context of World War Two, but my hero is the understated – and equally democratic – Henry Moore.

What examples of ‘democratic’ art are in Te Papa’s collection? While the Dutch Republic of Rembrandt’s century doesn’t closely fit with modern ideas of democracy – it took the Patriot Rebellion of 1785 to assist that – there was far greater religious toleration compared with neighbouring countries, and indeed a kind of multiculturalism before its time. The latter was allied to trade. Tolerance towards foreigners wasn’t so much a virtue as a pragmatic necessity, it was all about making money. Highly commercialised Dutch art was in turn far less driven by traditional hierarchies of subject matter: genre painting, still life and landscape were all massive compared with their lowly-rated counterparts in France and Italy.

And you can tellingly contrast the near-contemporaries Peter Paul Rubens and Rembrandt in many ways: Rubens the Catholic royalist versus the more ‘democratic’ Rembrandt.

Whereas Rubens is justly famous for his 24 vast paintings depicting the undistinguished life of the monarch Marie de Medici, there are no depictions in his oeuvre of blind hurdy-gurdy men receiving alms, beggars leaning on sticks or women cooking pancakes – to cite just three examples of Rembrandt’s etchings in Te Papa’s impressive collection.

It is in 19th century French prints that we really see a much more recognisably modern democracy at work. There’s a defiance about the large, anonymous, heavily toiling diggers in Jean-Francois Millet’s etching of that name. ‘I believe in my fellow man, don’t you?’ he demands.

For precisely this reason Millet was considered a dangerous subversive by his well-heeled and often anti-democratic contemporaries. He reminds his audience that these diggers are voters too: France had granted all adult males suffrage in 1848, just seven years before Millet made this work.

None greater than Käthe

By the early 20th century the idea that even women might be safely permitted to vote no longer seemed outrageous. New Zealand, of course, showed that it was possible. And, as political theorist John Dunn notes, ‘Mass socialist parties with democracy on their banners could be left to compete with their rivals, if… not yet on equal terms, at least without constant harassment’ (Dunn 154).

A banner is held aloft in Käthe Kollwitz’s etching, a scene from her Aufruhr series, depicting the failed revolt of the Silesian weavers of 1844, brutally suppressed by the authorities. A measure of how things had moved in the interim half century was the recommendation that Kollwitz be awarded the gold medal of the Große Deutsche Kunstausstellung (art exhibition) in Berlin, though approval was crucially withheld by Kaiser Wilhelm II.

Kollwitz’s graphic power and her passionate social democracy – stopping short of communism – makes her a democratic icon of 20th century art. It isn’t by chance that her sculpture Mother and Dead Son was placed at the centre of the Neue Wache in Berlin, nearly fifty years after her death, as a monument to ‘the Victims of War and Tyranny’.

It’s definitely a relief to move from the traumas of modern Germany to the discomforts of freezing Aucklanders, depicted in Lois White’s No bus shelter here. Instead of painting the all-dominant New Zealand landscape, White focusses instead on issues of human, topical and sometimes religious interest.

She was a devout Methodist and a committed supporter of the Labour Party. Christianity and social democracy worked well together, and were famously exemplified in the ethos and achievements of the much-loved first Labour prime minister, Michael Joseph Savage.

So, what is the relevance of this here? White is surely advocating care and concern for her fellow travellers, and obliquely reminds privileged local politicians (probably car drivers) of their responsibilities to their constituents.

While the painting pre-dates J. K. Galbraith’s famous dictum of ‘private wealth and public squalor’, it’s a nice reminder of such an injustice which a democratic society neglects at its peril. Furthermore, it has special resonance for me as a public transport user today!

What do you think?

This was a question famously asked by Te Papa when it opened nearly 20 years ago, and in this blog above all it seems highly relevant. Should art and democracy be considered together, or does art really have a language of its own? Who impresses you as a ‘democratic’ artist? How does Simon Denny’s current installation, Secret Power, relate to this theme?