Kalani‘ōpu‘u’s gift to Cook: a sacred cloak and its history of display

In 1779, the chief of Hawai‘i Island, Kalani‘ōpu‘u, who traced his regal line to the great chief Līloa of Waipiʻo, greeted an English captain named James Cook after his ship made port in Kealakekua Bay. As a demonstration of his goodwill, Kalani‘ōpu‘u gifted the ‘ahu ʻula (feathered cloak) and mahiole (feathered helmet) he was wearing to Captain Cook. After the ‘ahu ‘ula and mahiole left on Cook’s ship, both were taken to England and passed through the hands of various museum owners and collectors. They eventually came to the Dominion Museum in New Zealand, the predecessor of Te Papa Tongarewa. In a few weeks, the ‘ahu ‘ula and mahiole will return together to Hawaii. The chronology that follows recounts their time in New Zealand’s national museum.

The ‘ahu’ula and mahiole came to the Dominion Museum (Te Papa’s predecessor) as part of the Lord St Oswald Collection. This collection of rare and beautiful artefacts includes treasures such as a Society Islands mourning costume, and a number of Maori taonga. Some of them have a direct connection with Cook’s voyages. These were treasures acquired by the collector William Bullock from various sources. He displayed them in his own museum in London.

In 1819, Bullock sold off his entire collection. The items now in Te Papa were bought by Charles Winn (1795 1874) for his private collection. In 1912, after they had been in the family nearly one hundred years, Charles Winn’s grandson, Lord St Oswald, gave them ‘to the Dominion of New Zealand’. The gift came as a complete surprise to the Museum’s director, Augustus Hamilton. He commented in a letter at the time, ‘Goodness knows what the reason was that prompted Lord St Oswald to send them out to New Zealand.’ 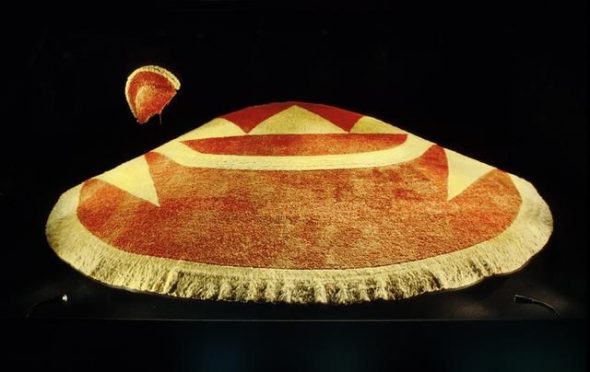 The Dominion Museum holds an exhibition of Hawaiian feather work featuring the items from the Lord St Oswald Collection.

The ‘ahu’ula is loaned to the Bishop Museum in Hawaii for a special display during Aloha Week. See Nupepa for the story

The ‘ahu’ula alone travels to the Bernice P. Bishop Museum in Honolulu where it appears in the exhibition “Artificial Curiosities: Being an Exhibition and Exposition of Native Manufactures Collected on the Three Pacific Voyages of Captain James Cook, R.N.” from January – August 1978. 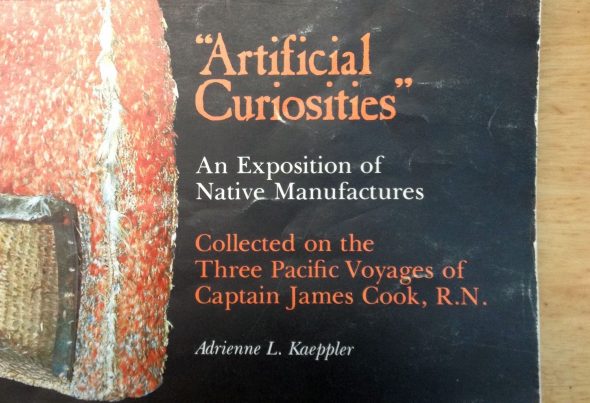 A new display of the ‘ahu’ula and mahiole is prepared for the Pacific Hall, in the National Museum, Buckle Street, Wellington. The ‘ahu ula undergoes major conservation treatment and is rehoused in a state of the art display case. The occasion is marked by a special event on 2 July 1984 opened by Kenneth F. Brown Member of the Board of Trustees, Bernice P. Bishop Museum, Honolulu, Hawaii and hosted by Maui Pomare. 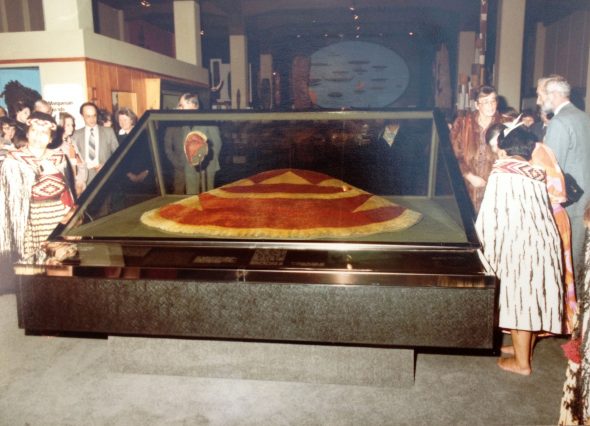 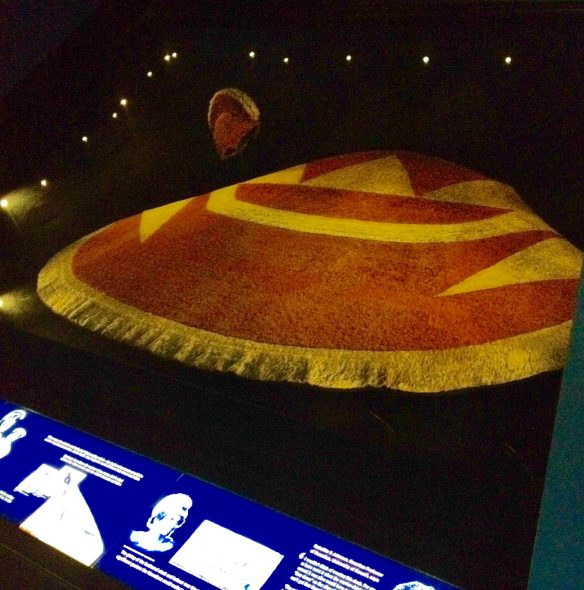 The ‘ahu’ula and mahiole are filmed for Tales from Te Papa – a television documentary series. The treasures are presented and discussed on Te Papa’s behalf by Hawaiian scholar Herman Pi’ikea Clark who lives in New Zealand.

An increasing number of Hawaiian artists, activists, researchers and school groups include Te Papa on their travel itineraries to New Zealand so they can visit Kalaniopu’u’s mahiole and cloak. The ‘ahu ula display at Te Papa is described by local Hawaiian academic Emalani Case as a puʻuhonua, a place of refuge, sanctuary, or peace that she often shares with friends and relatives visiting her in New Zealand.

From 2013, Te Papa is visited by delegations from the Bishop Museum, The Office of Hawaiian Affairs. Conversations begin about the possibility of a long term loan of the ‘ahu’ula to Hawaii following on from the successful 2010 reunification of the three last great Ku images from museums in the United Kingdom and the United States. In late 2015, the ‘ahu’ula is taken off display to be prepared for its journey to Hawaii.