As part of a series of blogs about the giants that feature in the exhibition, Gallipoli: The scale of our war, and to commemorate the anniversary of the Battle of Chunuk Bair, I have been asked to write about the two Māori soldiers who are found in the Machine Gunners tableau in Segment Four: Chunuk Bair; Private Rikihana Carkeek, from Ngāti Raukawa and Corporal Friday Hawkins, from Ngāti Kahungunu. 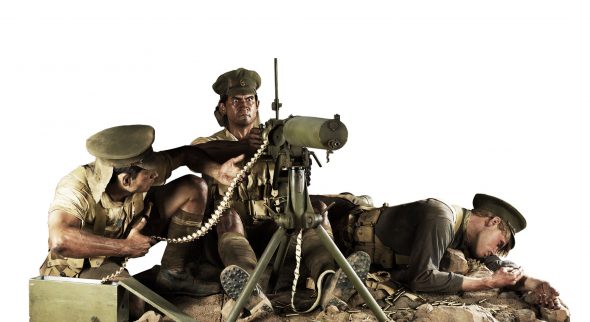 The scene that is recreated in the exhibition is based on a paragraph taken from Rikihana’s diary, that outlines their action during the Battle for Chunuk Bair:

Bullets seemed to be whizzing and sputtering from all sides, right, left and front. Just after our officer, Lieutenant Waldren [Warden], had given us the range he was shot and fell back amongst us in a heap. He managed to say “Carry on boys”, and then died in the arms, I believe, of Private Lucas who was our No. 5 on the gun. Almost immediately after the loss of our leader, our gun corporal Donald Ferris was shot through the head and killed instantly and I dragged him away from the gun and laid him beside our officer. No. 2, Private F. Hawkins, took charge of the gun and I moved into position to feed the belt. Shortly afterwards he was out of action, shot through the wrist. Then I took charge and opened fire at 250 yards. I also did not reign for long for I was shot through the body at the base of neck and out of action. No. 4, Roy Devon, took charge. He was badly wounded, followed by J. Lucas, wounded. I hardly remember what followed afterwards.” 8th August 1915. Carkeek. R. 2003. Home Little Maori Home. Wellington: Totika Publication. p. 79.

Both Friday and Rikihana were soldiers in the Māori Contingent, and found themselves in the same machine gun team positioned on Rhododendron Ridge during the Battle for Chunuk Bair, under the command of the brilliant, Colin Warden (for more about Warden, read this blog, here).

One of the key emotional aims of the exhibition was to ensure it maintained focus on the personal stories and experiences of the soldiers featured. In order to continue with this approach, I have invited the families of Rikihana and Friday to describe these two men for us, asking them a series of questions and I present their answers here. The answers have been lightly copy-edited but are otherwise exactly as they wrote. I have separated the profiles into two blogs.  This blog, Part One, is about Friday Hawkins, as described by his daughter, Michele Kett, and grandson, Gary Jackson.

Corporal Friday Hawkins, 16/243. Māori Contingent: as told by his descendants

Michele:
Friday Patrick Hawkins was 56 when I was born, and 11 months and 10 days later my sister, Patricia, came along. She was a twin but the boy was stillborn. I know that this was very sad for him. He lived in Australia for nearly 18 years after WWI with his then wife Helen, and their adopted daughter, Noni. He spent many years in Manly and was a founding member of the North Steyne Surf Lifesaving Club. I still have a photo of him in the lugger taken in 1939, which appeared in Pix magazine. He was a wonderful father. I always felt utterly safe with him. I liken it to being under a strong tree that would shelter me from any storm. He was a gentleman, and so were the men who were his friends. He was quiet and unassuming but if push came to shove, he would be there. He was dignified and treated others with dignity. I respected him so much.

Gary:
As we grew up we initially saw Grandad Hawkins on visits to Auckland where we met his new family including Michele and Patricia and on the times he would visit Wellington to call in and see Mum and Dad.

My memories of Friday  are of a smiling, kind, gentle man.

As my family grew up, Noni would tell us all of her life growing up in Australia with Helen and Friday and of the hard times and good times during those pre-war depression years.

Michele:
We moved to Auckland in 1950, from Kaikohe, and he spent all his spare time turning clay into soil and creating a large vege garden. We lived near Mission Bay and he would take us to the beach to walk in the sea if we had cuts or scratches and he taught us to swim there.

He was an avid reader. Every week Mum would visit the Library to stock up on books for both of them. There was a magazine he read which was akin to National Geographic but featured people who travelled to strange and interesting places which I read too. I recall reading about the Komodo dragon, and learned a lot about the world. I can still see him now, sitting quietly, smoking his pipe and reading.

Once we acquired my grandmother’s piano, we would spend many nights around in singing. Mum had an amazing voice, I think she would have been a great Brunhilde, had she made it a career, and Dad had a beautiful baritone. We all sang and there was a lot of laughter too. Until I left home in 1968, I would often go to sleep hearing the sound of the piano and singing. We played cards as a family, mainly 500 and cribbage.

He often made us breakfast before we went to work, porridge with cream and sugar. I cannot eat porridge without cream to this day; and boiled eggs with toast, bubble and squeak when we had leftovers. He was a great cook. He loved getting a pig’s head as a treat. I collected toheroa from Dargaville one year and he was in heaven cooking them up.

When I was about 9, we spent 8 months in a caravan in Waimarama. We attended the local school and he spent many nights out with the local men destroying hundreds of wasps nests built into the banks of the streams. I spilled a kettle of boiling water over my hand and he immersed my hand in the stream immediately and put it into a jerry can of water overnight. I suffered no blistering or scarring as a result. We caught whitebait and he would sit on the rocks and eat sea urchins.

From the age of 12, on a Saturday night, we would walk to the Berkeley theatre in Mission Bay to attend the movies. He was always great with any boyfriends I brought home and in those days it was all of them! They’d spend as much time talking to him as me. He worked hard for us and was still working at 72 when he contracted rheumatic fever which damaged his heart. It was very hard for him to be told to give up work and his beloved vegetable garden which included strawberries.

During his last years, he and I would walk to Mission Bay on a Sunday evening to hear the band playing beside the fountain. I asked him how he felt about not being able to die with his boots on. He said, “I don’t want to upset your mother.” He died 5 months after I married and moved to Australia, and I could not get back to his funeral. It took me 14 years to mourn him and I know he watches over me still. He was an example of what a man can be – honest, hardworking, gentle, but strong. I give thanks for him every day.

Gary:
I wonder if Grandad Hawkins knew what influence he was going to have on our family when he brought my father (Bully Jackson) home to meet my mother (Noni Hawkins) when they were on leave from Papakura Military Camp in 1940. Friday was Dad’s drill instructor when he enlisted and they became firm friends.

Mum and Dad were married shortly before both men were posted overseas with the 28th Maori Battalion and my sister Derna was born while Dad was in North Africa.

Michele:
Dad attended Anzac Day every year, dressed in his suit and Homburg hat, very elegant and handsome. We would go to see him march and then he would arrive home later. He was not a drinker but meeting with the men he’d known during the war was very important to him. He talked a little about Gallipoli but never in detail and he had great respect for the Turkish soldiers.

Michele:
My children, Rachel, Rebecca, Ruth and Emrys, never met their grandfather but my daughters accompanied me to see the exhibition and we very moved by it. Learning about his experience gave them an insight into the man. It was a very emotional event for all of us and a tribute to the Pioneer Battalion and all the men who fought there. I know they felt very proud of their grandfather and a deeper connection was made with him as a result.

Gary:
It has taken the events around the 100 year Anzac commemoration and in particular the tribute to the Maori Contingent at Gallipoli to rekindle my children and grandchildren’s interest in this man they had never met but had heard all these wonderful stories about him.

Needless to say, they were excited and felt privileged to be invited to visit Te Papa and take part in the opening ceremony of the Anzac WWI Gallipoli Centenary Exhibition.

It has also reunited my family with Michele’s and we can all be proud to have known the man whose influence on us all in so many ways has made us who we are today.

Michele:
An understanding of the futility of conflict, and a respect for the suffering and courage of those who go to war to defend their countries. The pity is that it is only those who have experienced the horror of war who appreciate its uselessness.

Michele:
The exhibition was very personal for me, but to hear and read the accounts of those represented in the tableaus created a deep emotional connection to their experience. Even if you did not know anyone who went to Gallipoli, it would be impossible not to be moved by it. Each of the exhibits left an indelible mark on my soul. Thank you to all involved in this extraordinary feat. New Zealand ought to be proud of you.

My thanks to Michele Kett, and Gary Jackson, for their time and consideration.

Carkeek’s Story – Gallipoli: The scale of our war website

Chunuk Bair – Gallipoli: The scale of our war website