Fa’alupega or the naming of chiefly titles is a fundamental part of Samoan culture and custom, as it connects individuals and families to land and origins of their past. This book O le tusi fa’alupega o Samoa was adapted from the work of Misi Kirifi Le Mamea, Te’o Tuvale, T. E. Faletoese, F. F. A. and Kirisome, F. L. with the first edition published in 1915. It includes key titles from Upolu, Savai’i, Apolima and Manono. This knowledge is usually acquired over time by matai (chief) and are recalled and acknowledged in speeches during special ceremonies and events. 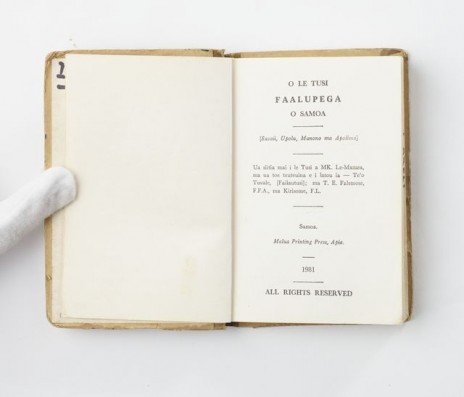 The London Missionary Society established the Malua Theological College in Samoa in 1844, and along with the school, the Malua Printing Press which published the bible and written work like this book. In the introduction Harry Strong Griffin, supervisor of the press at the time, highlights the text as a “to’oto’o i le ua vaivai” – a help to those who are weak.

This book represents an important collection and moment in Samoa’s history, where indigenous Samoans collated the oratorical recollection of titles in written form. This was the first of its kind, as previous publications of fa’alupega were published through the work of foreigners.

This edition was published in 1981. Previously it belonged to Reverend Ioane Akeli, a catechist working for the Catholic Mission in Sāmoa. It was brought to New Zealand by his son Suluape Visesio Akeli when he migrated with his family to Wellington in the 1980s.