The exhibition Brian Brake: Lens on the World is now touring New Zealand and recently opened at Auckland Art Gallery, where it drew large crowds on its first weekend. This followed phenomenal attendances at its inaugural showing at Te Papa. An estimated 191,000 people visited the exhibition over its six and a half month duration. That’s an average of 1,000 a day. On opening day there were 2,700 visitors.

I’m not surprised by the opening day’s figures, because when I gave a floor talk on that weekend there were so many people in the gallery I couldn’t stand back to address the audience: I was simply part of the crowd. I was wearing a near-invisible microphone and I’m sure many people had no idea whose voice from amongst us all they were hearing over the speaker.

You can Vote and Win!

The day after the exhibition opened in Auckland it was announced that the catalogue, Brian Brake: Lens on the world was a finalist in the New Zealand Post Book Awards – in the Illustrated Non-fiction category. There are some other excellent books in this category, so who knows if it will win, but there is also the possibility of gaining the People’s Choice Award. You will have to help though. Vote for it on-line before 8 July and you will also be entered into the draw to win $1,000 worth of book tokens!

Vote for Brian Brake: Lens on the world

A less heralded aspect of the Brian Brake exhibition has been the mini-website at Te Papa. This is intended to remain as a resource over the long term. It arranges Brake’s work into the same categories as the exhibition, but with additional images added. You could call it the director’s cut, for these are mostly images left out of the exhibition and catalogue for space reasons. There is also a lot of information about Brake here, including a brief biography, common asked questions about him, and even a map of the world showing where he took his photographs. You can find it all on Te Papa’s website by looking under ‘Past Exhibitions’ or by clicking on this image of the website: 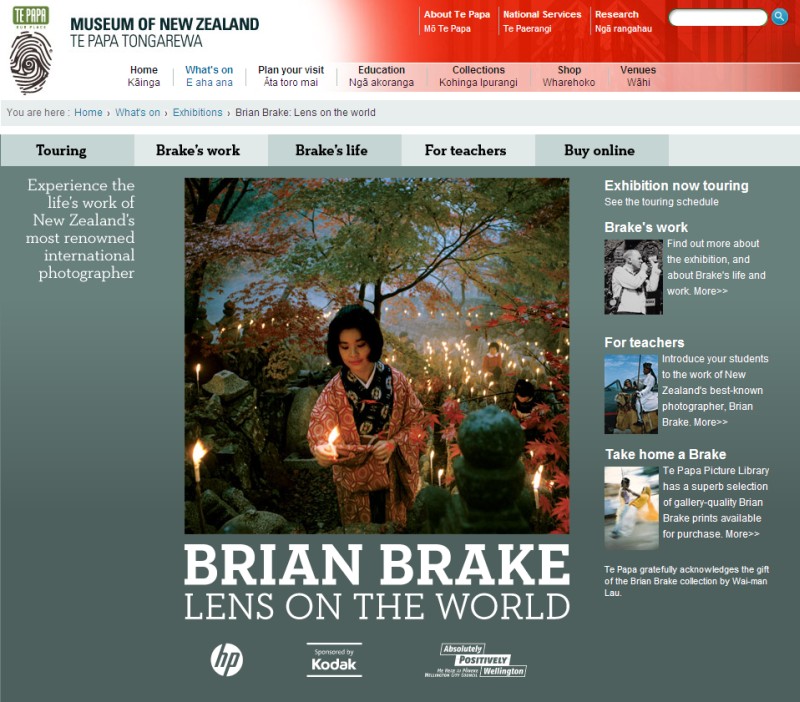 You can also visit Te Papa’s Collections Online and view a vast quantity of Brian Brake’s work. It’s best that you know what you are looking for first though, as there are around 26,000 images. Many of these were scanned after the exhibition and book selection were made. Once they were available several photographs that had proven too hard to find manually turned up. Here are two favourites that were found and which I really wanted to include in the exhibition and publication:

I was pleased to discover that Brake said that this photograph of young people on a cliff near Tauranga was also one of his favourites. He regretted that it was left out of the 1973 edition of New Zealand, gift of the sea due to the by then dated clothing styles. Actually, I think today that it’s the fashions which contribute interest to the image. Not only could it be read metaphorically as distracted youth standing in front of the vast expanse of future possibilites, but also as exactly how the 1960s felt.

This one is a barely-known image, though it did appear in the international edition of Life for an article on the long-serving prime minister of Singapore, Lee Kwan Yew. It was used as a copy image from Life magazine in Brian Brake: Lens on the world, but now we have found the original, which is much clearer. I love the controlled chaos of the scene, taken on an electioneering tour, with the band conductor looking sideways to check the advance of the procession, the man dodging ahead of it, and the suggestion of firecrackers by the smoke-filled background.

Athol McCredie, curator of Brian Brake: Lens on the World